The fragrance of a flower

Five years is usually a long time. Come to think - its half a decade, enough for the tears to dry, scars to heal and memories to turn sepia. A few days back on the 13th of December a question popped up in the mind. Are we past the  winter that had set in five years back the same day ? The dark, dramatic hues of the evening sky that had given way to the cool hues of the night, the night cold wind had blown across the lonely heart - the question remained - does the heart still pine for the love of its Master or is it now just another fond memory ?

In the following few days we went back to the daily routines of our professional lives, immersing ourselves in work as usual. But as they say love finds its way to the heart. While watching a documentary on a Canadian Concert Tour, the thoughts went back to an evening in Benares sometime in the 1990s - the venue was Tabla maestro Pt Kishan Maharaj’s music hall - Satguru Ji had just finishes singing and the baithak was about to end - and then he started singing another composition culminating in a conversation - and a few moments later Satguru Ji started singing another composition - and so it went on for the next half an hour or so - the visiting Guru Jan were mesmerised by what they heard and saw, with one of them remarking Satguru Ji’s love for music was insatiable. While memories such as these moistened the eyes - several more came back in a flood. 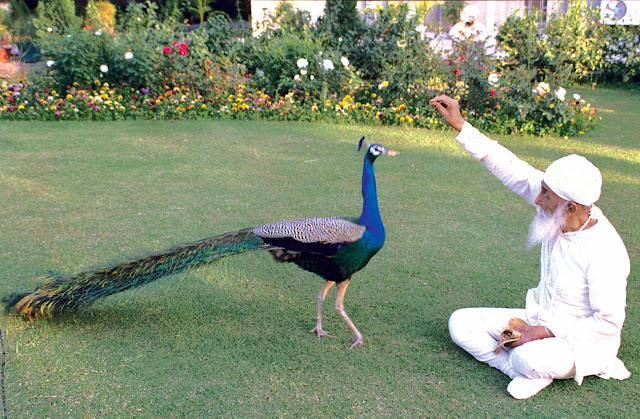 It was sometime in 2006/07 I had had the opportunity to be around and observe Satguru Ji for a couple of days on a tour. A lady had requested regarding her health and Satguru Ji had promised to look up a Doctor for her. Satguru Ji Himself was recovering from a minor stroke and had just landed from a short trip. Over a period of the next 12 hours or so Satguru Ji persistently followed up almost every hour until the recommended doctor was connected to the ailing woman and her treatment commenced. The indelible foot prints of such unconditional love and faith brought a lump in the throat.

Life has come a full circle. I am at an airport again and the story has me as excited as I was since the first time I set eyes on it 3 years back. The story of 3 brave Indian Air Force Pilots who escaped from a POW camp in Pakistan post the 1971 war. A story that at first intrigued the film maker in me to prod and probe for more. The story of the Great Indian Escape - खुले आसमान की आेर. And today as we get into the last stage of the post production and subsequently the release our film, our journey has been anything but a miracle.

Miracles - Yes! Over the past 3 years we have witnessed several of them.

It was at the Bangalore Airport when I came across the story. What made it stand out was the fact that apart from it being an escape story, the protagonists were Indian and unlike a criminal trying to break prison, here it was the call of duty and demanded high level of patience and perseverance, coupled with the fact that the IAF pilots were POWs in a Pakistan still coming to terms with their partition and the loss of a war with India. The delay in flight had done good. A couple of hours later by the time I landed in Mumbai, the story had found its way to the heart  and resonated with the adventurous super hero comics that one had read as a child. But there was something missing - I wanted to know more about these real super heroes - what did they look like, how did they behave, their aspirations, their determination - why did they do it the way they did it? How did they think up of all those things? What was it like to be in Pakistan? The questions kept coming, the good part was unlike Batman and Superman these were real people so there was a good chance that if I could find out where they lived, I could attempt to meet them. And so the journey began.

Later in the night I goggled… Surely I would find them. Alas, there was no mention of any of them on the internet, nothing about their great escape (as we would end up calling it later), it was surely the Indian Air Force’s best kept secret. So we kept digging and except for a small blog from a neighbour of Flt Lt Dilip Parulkar, the architect of the escape (I would also later learn that he was now a well decorated Group Capt - Retd.) We immediately emailed the gentleman and asked him to help us connect with Mr Parulkar. A couple of days later we were rewarded with his email id and telephone number. A brief exchange of emails led us to meet him at his home in Pune. Excited, I didn't let go of his hand for several moments, after all this was the first time in my life that I was coming across a real super hero - someone who had done something that we only see and hear of in the movies. A coffee, lunch and a couple hours later, I was a happy kid with an autograph of the super hero. I couldn't hide my excitement any more and proposed that we make a movie out of the story - what kind, I wasn't sure - a commercial, a documentary etc., He laughed out aloud, amused at my enthusiasm he asked - ‘it has been almost 45 years, who would be interested in seeing it’. And I answered ‘every Indian’.
A few days and few more conversations later we ended up in Pune again. This time with a camera and crew. The next five days were exhilarating as we documented and recorded Dilip’s life. What emerged was not only the Escape story but the story of an character who was shaped by the events and several other characters who were a part of it. They were all so real, they had their fears, their fallacies, their baggage yet what underlined their lives was their love for their country, their grit, determination, bravery and imagination - to stick together in face of adversity and come out on top.

From bombing a Radar Station near Lahore… To the months of solitary planning in the Rawalpindi POW Camp… Scraping a window with a dinner knife, planning the escape route, concocting a compass and other essentials out of nothing, digging their way through the wall - brick by brick, escaping through the Khyber Pass onto Torkham, the Afghan – Pak Border. We surely were uncovering one of Indian Air Force’s best kept secret - The escape, no not just that - the secret of what IAF Fighter Pilots are made up of.

Film Production is a full time job and having spent a good part of the past 20 years editing and directing features / commercials / documentaries for myself and others we were not unaware of what we were getting into. Somewhere in the back of the mind we were reassuring ourselves that  the story was so powerful that we would surely find funding for it, little did we realise then that this would be our foray into the world of Independent film making - which while exciting, comes with it’s own share of challenges. But more on that later.

Armed with our fifty plus hours of material, several volumes of IAF history, books written on the 1971 war as well as the escape along with sleepless nights spent on the internet researching, the next three months went by - writing, narrating, debating - again and again - not necessarily in that order. It was Dilip, me, my wife Bandna (who would later on also become the Producer of the film), my writing team of close friends Asheesh Kapur (he plays the role of Flt Lt Harish Sinhji in the film) and Nimesh Balaji Shinde (he plays the role of Fg Off Vidyadhar Chati) our friend and critique Praveen Dhankar. It was early 2015. We thought that we had the story penned down. The first few narrations amongst ourselves were nothing less than a trial by fire. Several questions would crop up, some needed to be answered by the other Super heroes of the POW camp.

With Dilip’s help we soon connected with several of them. Wing Commander MS Grewal (Retd) - his narration of the digging and planning was pulsating, Group Capt Tejwant Singh (Retd) - his detailed description of the camp, its surroundings and the general environment shaped our production design , Air Commodore JL Bhargava (Retd) - his interaction gave us an insight into the Pakistani psyche, Wing Commander DS Jafa (Retd) - who was ADC to the Chief of Air Staff - Air Chief Marshal PC Lal at the start of the war and himself an articulate writer and speaker - his understanding  of the war explained the dynamics of the war as well as gave an insight into everything India vs Pakistan, Wing Commander Vidyadhar Chati (Retd) - a loyal member of the escape team, his observations added not only to the story but to the sound design of the film as well, the family of Group Capt Harish Sinhji (Retd) - Kaveri Sinhji, Vikram Sinhji Rana and Vidya Sinhji - let us in to the personal world of Flt Lt Harish Sinhji, sharing the intimate letters of their father as well as the Air Force’s communication with the family during the period. In their collection we found the original POW uniforms that the camp inmates had worn contributing immensely to the costume design of the film.

Several of the questions got answered, their screen characters came to life with their subtle nuances, their way of talking, their thought process and their vast knowledge. The diversity and unity of India sprung alive in the POW camp - in enemy territory - wow! While the first round of scripting had given us a tight screenplay. This second round of research also gave us our dialogue. Each conversation so real and rooted in the earthiness of the character. I am indeed indebted to the several hours each one of above people spent with us, their eyes would light up when they spoke, the subtle hand waves, their smiles and the heaviness of the voice when narrating a particular sensitive moment added up to all the drama. The story had found its soul. And we had slowly but surely unraveled Indian Air Force’s best kept secret. It was a story that needed to be told. It is my story… your story… our story… India’s story - one that we can all be proud of.